Saints Irenaeus, Bishop of Sirmium and Demetrius, his deacon 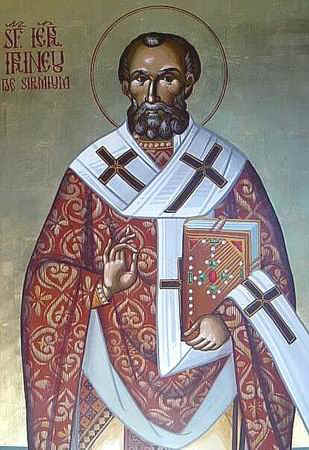 Saint Irenaeus (or Irenaios) of Sirmium, bishop of the most important roman city in the 3rd century on the Danube, is a martyr saint of the latest roman persecutions against the Christian in the Balkans.
As already mentioned in the passio of Sts. Montanus and Maxima (+26 March 304), the situation of the Christians in the western Balkans (province of Illyricum) at the end of the 3rd century was quite difficult. The Roman Tetrarchy, composed by Diocletian, Galerius, Maximian Hercules and Constantius Chlorus gave four edicts against the Christians, three in 303 and one in 304. Because the new religion didn’t accept the imperial cult, its adepts were considered direct enemies of the state and therefore the ones discovered to be adepts of this dangerous faith were tortured to death, in order to come back to “order”. Of course, the most hunted were the members of the hierarchy as the leaders of the community.
The imperial edicts stated, near the physical punishments, the destruction of the Christian places of worship, the confiscation of the Christian possessions.  Of course, the edict had a different way of applicability in the roman provinces. Galerius, who governed the Illyricum from its capital, Sirmium (today Mitrovitsa, not far away from Belgrade) since 21 May 295, respected strictly the decisions of the edicts. There is quite possible to be influenced by his mother, Romula, who detested the Christians. In this context was tortured and killed St. Irenaeus, the bishop from Sirmium. There is unknown if he was the first bishop of this important city, or there were some other bishops before.
The martyrical act of St. Irenaeus is kept into Latin in its original form, being probably a copy after the verbal process from the court leaded by the governor (praeses) of Pannonia, Probus, the same who convicted a few days before the priest Montanus and his wife, Maxima. Probably only the introduction and the conclusions of this text were added by a Christian author. The document is important because it attests the Christianity in the Danube provinces, but also by describing the roman judging procedure in the times of Diocletian and Galerius. The critical edition of this text was edited and published in Latin and English by Herbert Musurillo in The Acts of the Christian Martyrs, The Martyrdom of Saint Irenaeus Bishop of Sirmium, Oxford, 1972.
The resume of this text it will be reproduced in the following: Saint Irenaeus, in spite of being bishop, was married and had young children. He was arrested by the order of Probus and judged in the court from Simium. Probus asked him to obey the law and to sacrifice for the gods, by Irenaeus responded that “the one who sacrifice to gods and not to God will be removed from the chosen ones” (Acta II,1). Refusing to bring sacrifice, he was prepared for tortured, saying that he is happy to be a part of the Lord’s sufferings. Probus still repeated his question, whether sacrificing or not, during the torture. Later, trying to convince him in another way, he brought the parents of the bishop and later his children who asked him to have mercy of them. The other relatives tried to convince him, telling “have mercy of your youth” . In any case he refused repeatedly so Probus sent him finally into jail for some days. 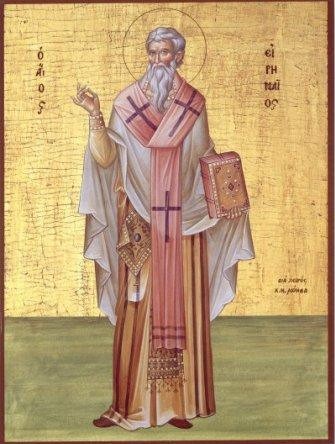 Later, Probus ordered that Irenaeus to be brought in the middle of the night and started the torture again. After beating him with rods, the governor asked him if he has relatives, children, wife, parents, but he answered “no” and stated that any Christian loving his relatives more than God is not worthy of his Master (Mt. 10,37). Probus tried once more to convince him for the sake of his children, bur Irenaeus said that they have the same God who can save them. Finally Probus didn’t resist anymore so he menaced him by beheading him. Irenaeus thanked for that and asked the Roman governor to do it, in order to see how the Christians learned to despise the death for their faith in God. Shortly after, the soldiers have cut his head on the bridge of Basent in this city. In the last moments he prayed to the Lord with these words: “Lord Jesus Christ, who kindly wanted to suffer the passions for the salvation of the world, please open your heavens, in order that your angels receive the soul of your servant Irenaeus, who is dying in your name and for your people, who increases in your universal (catholic) church from Sirmium. I am begging you and praying your mercy, receive me to you and kindly strengthen the others into your faith”. After beheading, he was thrown in Sava, the river flowing nearby.
The author of the text ends the story by saying that he was martyrized in the 8th day of the Ides of April (6th April) during the governing of Emperor Diocletian and governor Probus, but also during the royal times of our Lord Jesus Christ.

Saint Demetrius, deacon in Sirmium
A few days later, on 9th April of the same year some martyrologies celebrate the martyrdom of St. Demetrius, the deacon of bishop Irenaeus. He was killed being pierced in the side with a spear. According to some hagiologists in the Eastern Europe, the real identity of St. Martyr Demetrius of Thessalonica, celebrated on 26 October, was not one of a soldier, but of a deacon. An argument for this identification is that even later in the synaxarion composed by Symeon Metaphrastes in the 10th century attests the fact that a servant of the deacon, named Lupus, recovered his orarion reddened by the blood of the martyr and brought this holy relic to his community (though here it is Thessalonica and not Sirmium). In this context, it can’t be explained why a soldier would have an orarion, which is a typical piece of clothe for a deacon. Moreover, in the first depictions, St. Demetrius is represented as a member of the noble class and not as a soldier.
St. Lupus, his servant died also as a martyr, being celebrated on 23 August. It is supposed that the cult of St. Demetrius spread in all Illyricum in the next century (here it would be a problem, not being clear why it did not happen the same with St. Irenaeus), and they are reported many miracles occurred near the coffin with the relics of the saint. In the context of the weakening of the Roman power near Danube in the 5th century, a governor of Illyricum named Leontius have built a church for St. Demetrius in the new capital of the province, Thessalonica, and brought here the relics of the saint, supposedly in 413. So it may that the day of the celebration of the saint on 26 October might be the day of moving his relics. In the same time, Leontius built another church dedicated to the saint in Sirmium, a town named by the Slavs later as Mitrovica (today, Sremska Mitrovica).

The veneration of St. Irenaeus

There are no informations about the relics of the saint. The next period was very difficult for the cities on Danube. After repeated incursions of the barbarians in the V-VI centuries, Sirmium was in decline, the episcopal see ceased to exist. Sirmium decaded later and during the Slavic migration its importance was replaced with Belgrade (the former Singidunum), situated at the confluence of Sava with Danube. ). At this time many other relics many of the Pannonian saints were moved to other areas, where they continued to be worshiped. So happened with St. Demetrius moved to Thessalonica, St. Anastasia to Rome, etc. In any case, the veneration of the saint is recorded in some texts. St. Theophylact of Bulgaria, bishop of Ochrid (1088/89-1125) mentioned about a pilgrimage to St. Irenaeus (probably in Sirmium) and so miracles occurred there, in the Vita of the 15 martyrs from Tiveriopolsk.

In 1071 or 1072 Sirmium became part of Hungary. Pope Gregory IX restored in 1231 the bishopric of Sirmium and built a Benedictine monastery dedicated to St. Stephen on the shore of Sava. In the middle of the 13th century there is a mention about a church dedicated to the saint (ecclesia sancti Irenei Syrmiensis), but the exact location of the church is unknown. According to some researchers, it can be identified with the medieval church in Machvanska Mitrovica, on the right bank of the Sava, where it was discovered a cemetery from the 4th century. The church was built on the ruins of a martyrion from the same period and destroyed in 10th/13th century, but there is no data to show that the martyrion was initially dedicated to the saint. According to a local historian, V. Popovic, the martyrion of the saint may be located in another place, near a bridge which may be identified with the one where the saint was executed (Basent bridge).
In 1976-1977 there were made some other archaeological researches in the eastern suburban necropolis of Sirmium. Here there was discovered the ruins of a basilica from the second half of the 4th century. An inscription of an epitaph on the grave there mentioned about the “Basilica of our lord Irenaeus” (in basilica domini nostri Erenei). But this is all.

The revival of honoring the martyrs in Sirmium, among who is also Irenaeus, began in his home, Serbia, after Sremska Mitrovica became part of the Habsburg Empire (1718). Today St. Irenaeus is honored especially in Serbia, but also in the other eastern European countries, but the dates differ.
The martyrical death of Irenaeus is mentioned not only in his martyrical act, but also in another document, namely the Martyrical Acta of St. Pollion, the lector of the Cibalae church (who died on 28 April 304), a few days later. The Martyrology of Hieronymus mentions the martyrdom of Irenaeus on 6 April 304, such as a syriac Breviarium from 411. Another collections state other days: the synaxary of Constantinople: 23 August, together with Irenaeus from Lyons.  The second volume of the bollandist collection Bibliotheca Hagiographica Graeca (ed. H. Delehaye, BHG, N 948-949e) remembers St. Irenaeus on 26 March and 23 August, and the first from Bibliotheca Hagiographica Latina (BHL, N 4466; Novum Suppl., N 494-495), on 25 March. The error of dating may be interpreted by changing the 8th day of the Ides with April (6 April) with the 8th day of the Calendae of April (which is on 25 March, but because of the Feast of the Annunciation, his feast was moved a day later). This error was introduced also in some later maryrologies such the one of Florus, the so-called Small Roman Martyrology and Adon from Vienna (all in the 9th century), which may have been copied later in the 10th century by the synaxary of Constantinople.
Following these dates, St. Irenaeus is celebrated differently in the Churches. The Roman-Catholic Church celebrates him on 6 April, while the Orthodox on 26 March/8 April and 23 August/5 September, following the synaxary of Constantinople. There is to be mentioned here that the Romanian Church changed in the last years the day of celebration also on 6 April, after the martyrical document. In any case, the Churches following the Julian (old) calendar, even celebrating on 26 don’t make any difference, because 26 March corresponds to the Gregorian 6 April. The Armenian Church celebrates the saint on 23 August.

“Chant now and clap your hands, O Church of Sirmium! Leap up, ye waters of the River Sava, adorning thyself in the name of the all-praised Irenaeus! For, having fought the good fight and kept the Faith, sealing it with his blood, he hath acquired great boldness before God, Whom he entreated without ceasing, that his Christian flock be saved in peace!”