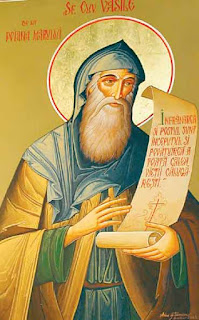 St. Hieromonk Basil was the spiritual father of St. Paisius the starets from Neamţ and one of the most famous teachers and followers of the prayer of Jesus in the 18th century. He is known also for the fact that he was one of those who revived the Orthodox monastic life in his time.

The life of the Saint

Basil was born near Poltava (Ukraine) in 1692 and is a representative of the Russian-Ukrainian monastic migration that occurred in the 18-19th centuries because of the reforms of Peter the Great in Russia and the persecution of the Orthodox believers in Ukraine which was under Polish rule. He lived as youth in different hermitages in Russia, in Moshenski Mountains near Kiev. He came in Wallachia together with his disciple, the monk Michael, and other monks in 1706, during the Reign of St. Constantine Brâncoveanu (…), in a period of religious and cultural flourishing. He settled in Dălhăuţi Hermitage near Focsani, where he lived as a hermit about 20 years. Here he deepened the biblical text and read many writings of the Fathers. Through prayer and theological knowledge he became shortly a good spiritual advisor of the brothers who lived together with him. Basil was ordained priest in 1715 and was appointed abbot of the monastery Dălhăuţi and quickly he was famous throughout Wallachia, even to the new ruler, Constantine Mavrocordat.
St. Basil was about 20 years the abbot in Dălhăuţi, where he gathered around him a community of 40 hermit monks. During this time there is supposed that he became aware of the hesychastic tradition initiated by St. Pachomius the Bishop of Roman (+ 1726) at the Pocrov Scete, and Basil implemented it among his disciples. Hesychasm is an Eastern spiritual movement.
The hesychia is a Greek word meaning “peace” or “silence” and refers to a tradition of hermit prayer, whose practice is called hesychazo, “keeping the silence.” The movement, known also as the Palamism, was developed at Mount Athos, while St. Gregory Palamas, Archbishop of Thessalonica (1347-1359). According to this doctrine, the Christian layman or monk must live in peace and silence, reconciling his body with his soul, remaining in a state of contemplation. The central practice is the so-called permanent prayer of the heart or mind ("Lord Jesus Christ, Son of God, have mercy on me a sinner"), a formula designed to keep awake the conscience of God’s goodness and of the sinful status of the creature. This tradition is supposed to be first formulated by Gregory Palamas, but there is evidence that the origins of the practice of prayer are much earlier by the hermits of Egypt in the first Christian centuries.
The community of Basil valued the virtues of obedience, humility, silence and especially the practice of Jesus’ prayer. The internal rule stated by the abbot consisted into the living in perfect harmony, daily reading of Scripture and the Fathers, practicing Jesus’ prayer, keeping the mind pure, only one meal daily and the weekly communion.
The monastery at Dălhăuţi became a school of spiritual hesychast experience famous in all the Romanian principates. The disciples came from Wallachia, Moldova, Transylvania and Russians, living in perfect love and good order. From Dălhăuţi the community spread to the hermitages around:  Trestieni, Ciolanu, Carnu, Ratesti, Rogoz, Bonţăşti, and Black Valley.
About in 1730-1733, St. Basil moved to the hermitage of Poiana Mărului (Apple’s Glade) together with 12 disciples, and from here he led spiritually all the hermitages from Buzău Mountains, which he visited regularly. One of his disciples was the St. Paisius of Neamţ, which stayed at Hermitage of Trestieni for several years. From here he went later to Mount Athos in 1750 and after his returning, he established the community at Neamţ, which became the focus of the East Hesychast communities in the 18th century.
Being very old, St. Basil gave his soul to the Lord on April 25, 1767, leaving many disciples. He was buried in the yard of Poiana Mărului  hermitage, probably somewhere near the Church dedicated to the “Sunday of All Saints”, founded in 1730 by him. So far his holy relics were not found.

Elder Basil wrote a few “Words” on mind guarding, on prayer and spiritual growth, which are short introductions to some ascetic writings. of the famous Nil Sorski Philotheos Kokkinos (1300 – 1379), Hesychius (7th century) and Gregory of Sinai
The name of his writings are:
-          Questioning answers gathered from the Holy Scripture for running away from the forbidden food of the monk’s votes (printed in Neamţ Monastery in 1816);
-          Foreword and Afterword to the book of the blessed Nile Sorski (1433–1508)
-          Foreword or Pre-travel into the Book of the  blessed Philotheos from Sinai;
-          Foreword and Afterword to the book and of Gregory of Sinai (1260s –1346);
-           Imagine of how we, the passionate and the command-breakers, should repent and learn to work the mental through living in obedience.

The quotations below reflect the teaching of the saint.

On outer and inner prayer: “Many, by reading the book of St. Gregory of Sinai (1255-1346) and still not having the work of the mind, go wrong in the understanding of it, believing that this work was given only to the holy and passionless men. Therefore, they are taking the usual habit, that is only the reading and singing psalms, canons and hymns, and so they are working only the outside prayer. They do not understand this kind of sung prayer was given to us by the parents only for a while, for our weakness and infancy of our minds. This is because, being familiar with the reading and singing, we should climb to the stage of the work of mind, and not to spend until the end in this (inferior stage). Because, reading and playing the outer prayer only with the lips, we remain to a happy opinion of ourselves, thinking that we make a big deal […] It isn’t possible to the one who fights in this way, only with the outer prayer, to gain the spiritual peace or the earn the victory crown. For this is like the one fighting during the night, who hears voices from the enemies and receives their injuries, but cannot see clearly who they are, from where they come or how (and why) do they hit, because the darkness blinds the mind. The one, who struggle like that, only with the outer prayer, cannot escape without being crushed by the foreigners. He bears the hard work, but he loses his payment”
About the monastic life: St. Basil of Poiana Mărului said to disciples that the monasticism has three ways: the community life, the living in small groups of two or three, called “the middle” or “royal”, having all together, and the third is the wilderness, which is the highest, done only by the holy and perfect ones, after they went through the first two ways. “But some monks choose another way, in outer any obedience and blessing. They make their cell wherever they want and live alone, caring more for the body”.

About the high asceticism he said that: “a too early asceticism is cause for pride and self-love, while living with others discover your weaknesses and protects you from temptation. It can clean you daily by the grace of Christ, working out of love for the Lord”.

The holy life of St. Basil was well known in his time and until today. That is why the Holy Synod of the Romanian Orthodox Church, on its meeting on 4-5 March 2003, decided that the Abbot of Poiana Mărului shall be venerated together with the venerable and God-bearing Fathers, having his special feast day on April 25, when he went to the Lord.

Hymn of the Saint (Troparion)

“Teacher of good honoring, advisor of the monks, preacher of grace, professor of the watchfulness prayer, pious father Basil, pray always Christ our God to save our souls!”